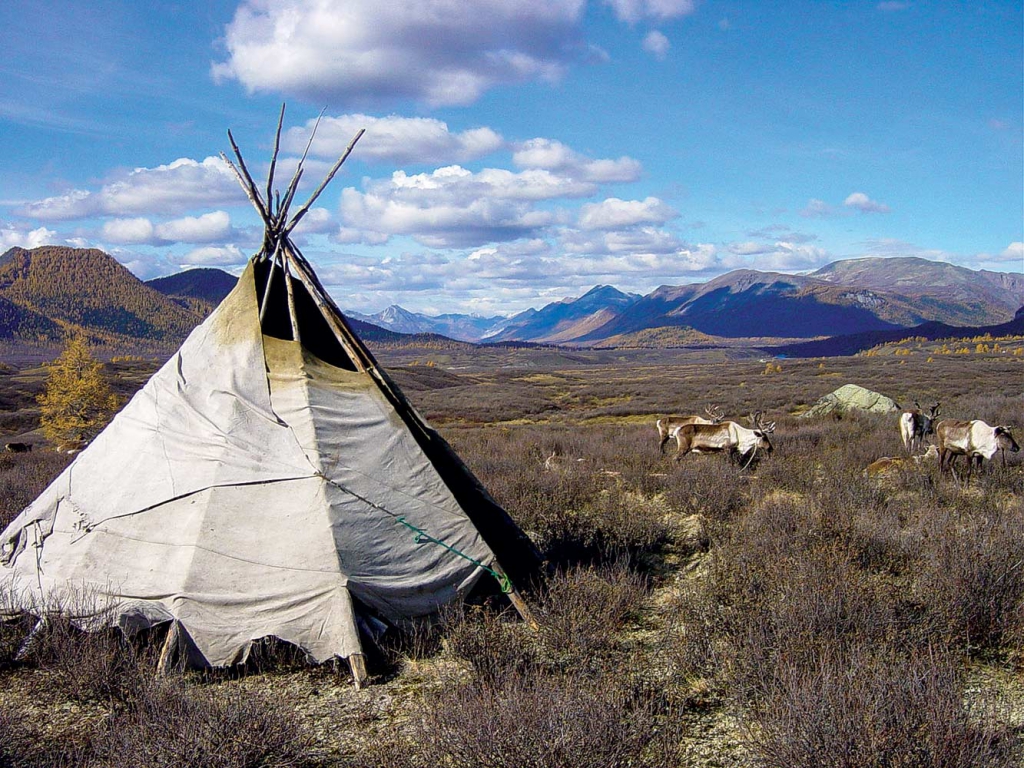 Dukha or Tsaatan ethnic minority (reindeer herders) lives in northern Khövsgöl (Khuvsgul) Province of Mongolia. The name Tsaatan which means ‘those who have reindeer’ in the Mongolian language, were originally from across the border in what is now Tuva Republic of Russia. The Dukha are one of the last groups of nomadic reindeer herders in the world. Tuva became independent in 1921, when Mongolia gained its independence. At that time, the reindeer herders were able to cross the border freely between Tuva and Mongolia. However, when Tuva was annexed to the Soviet Union in 1944, the border was closed. So the Dukha people fled from Tuva to settle in Mongolia’s northern Khuvsgul Region mainly owing to food shortages in the Soviet Union because of World War II, infectious diseases among children and fear of losing their domestic animals due to collectivization. In 1956 the Mongolian Government gave them Mongolian Citizenship and resettled them Khuvsgul regions most northern Mongolian around Tsagaan Nuur Lake on the Shishigt River.

The number of reindeer in Khuvsgul Province continues to increase in recent years. In 2019, 2,654 reindeer will be wintering in the East and West Taigas of Tsagaannuur soum. In 2009, the Government of Mongolia allocated funding from the state budget in order to improve the quality of the genes of the animal and imported 12 reindeers from the Tyva Republic of the Russian Federation. Later in 2014, a request was made to the Turkish Cooperation and Coordination Agency, and 19 more reindeers were bought, which were presented to the citizens in the East and West Taigas of Khuvsgul Province. As a result of the works, the income of the Tsaatan (Dukha) people increased and the gene pool of reindeer which serve as the main source of income continued to grow increasing the likelihood of survival alongside the number of its population each year.

Reindeers are main sources for food, clothes and tools for the Tsaatan people. Using reindeer milk, tsaatan people make all staple food from milk tea, cheese, clotted cream and yogurt to other dairy products. Reindeer hides are mainly used towards making the warmest shoes and fur jackets for the harsh and cold winters; and of course, reindeers are main transportation. In addition, reindeer dungs are used for stove fuels and antlers are used to make tools (knife handles, etc).

Tsaatan people move from one place to another without establishing any permanent settlements during the year. Tsaatan communities are usually a group of tents of two to seven households that move camp to find optimal grazing for the reindeer that are treated like family members and shown respect. A residential group consisting of several families is called “olal-lal” (meaning “them” in the Tsaatan language). They usually refer to a specific group by the name of a representative member. Families of the same olal-lal set up tents close to one another (within a few kilometers) and collaborate in livestock herding.

Dukha move to their summer camp in the middle of June and its altitude is around 2300m with fresh breezes. Because of the cold climate throughout the year, open grasslands spread across the high steppe and Reindeer cannot handle heat well so they must be pastured in high plains in the summer.

The beginning of August is the time for Dukha families to move down to different campsites to spend the fall season. When it begins to snow in mid-September, since there are no insects, the reindeer regain their vigor and the young males are castrated; from the end of September to early October is mating season for reindeer. The gestation period for a reindeer is about seven months.

Dukha usually settle down in the deep forest at an altitude of about 1800m where they can avoid the frigid winds. During winter camp, people remain in one area for a month at the longest and then move on to another place; especially when there are wolves nearby. Snow is not an obstacle for reindeer to find and eat moss because they can dig in the snow with their hooves and find the moss easily. Several residential groups band together and set out for “otor” (the herding of livestock by young men in distant areas) – it’s during the otor that the reindeer are free to move about and can find moss and grass easily.

Groups cannot move as quickly to spring camps because they must accompany the pregnant female reindeer. This is the time when weather tends to be harsh, with strong winds, so they settle in a place that shelters them from severe winds. Reindeer give birth between late April and mid-May.

The Tsaatan community chores and activities are centered around the caring and feeding of their reindeer. Herding tasks are shared amongst the camp with children from a young age – learning to care for the reindeer and keeping them safe as everyone is dependent on one another. Tsaatans say that if the reindeer disappear so will their Tsaatan culture and the reindeers are domesticated and belong to the household.

Tsaatan live in tents that are primarily made of birch bark that look like the tepees of Native-Americans. Evening time, reindeers return to the camp after a long day walking through the taïga to find some food. The girls and younger women do the milking. Young men and women and elders help with herding. A few of the men stay with the reindeer in the winter months, living in the open air with their herds to protect them from wolves and other predators. The men also make and repair their hunting tools, reindeer saddles and carts. Since they rarely kill a reindeer, they supplement their diet by reindeer milk products and hunting wild animals from the forest as Dukha raise their reindeer primarily for milk. Only a few reindeer are slaughtered during the year for meat and pelts. Because the taiga area is typically hilly and covered with forest, reindeer are not used for pulling sledges but rather for riding and as pack animals. Tsaatan are often busy with daily grazing, hunting, the collection of firewood, seasonal migrations, visiting relatives and friends, and traveling to the sum for shopping and trade.

Firstly, a 1.5m long thin stick in the right hand is used as a whip to which the rider gets on a tree stump and jumps onto the reindeer from the left side with the stick in the left hand and then transfers the stick to the right hand once the rider is mounted. The Dukha begins training reindeer for riding when the reindeer (called dongor at this age) are two years old. Adults are too heavy for dongor so it is usually the children’s job to train them. Adults ride on hoodai (three-year-old reindeer) or older ones as well as on zari (castrated males). Special training is not necessary to train the reindeer as pack animals and the male reindeer usually carry loads weighing about 40 kg (88 pound) while females carry up to 30 kg (66 pound).

Tsaatan people believe that their ancestors’ ghosts live on in the forest as animals that give guidance to the living, Shamanism practice, a religion based on nature worship. The Shamanistic practices among Tsaatans differ from those of other Shamanistic religions in the region. Shaman worship among the Tsaatan people is thought to represent the oldest variant of Shamanism practiced by Mongolian nomads. Not only do they worship their Shaman but they have many mystical holy books as well – and use many different scriptures in their daily lives, including those for hunting and for calling or banishing the rain.