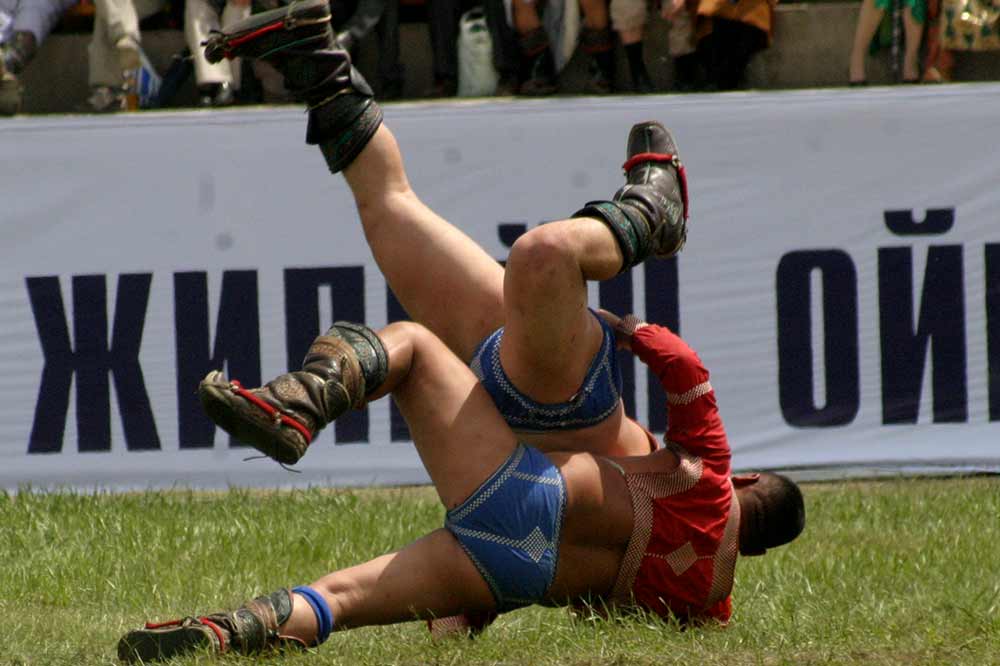 The National Naadam Festival on July 11-12th every year: This is a brilliant time to visit the country if you are interested in immersing yourself into the “buzz” of the nation’s most celebrated ancient events. Naadam Festival is that everyone should experience at least once his or her lifetime. The festival is also locally termed “eriin gurvan naadam”, “the three mainly games”. Mongolia’s Naadam focuses on wrestling, horse racing and archery, and there are smaller rural Naadams held throughout the country during midsummer. Women participate in the archery and girls in the horse racing; but not in Mongolian wrestling.

In 2010, Mongolia’s Naadam was inscribed on the Representative List of the Intangible Cultural Heritage of Humanity by UNESCO. Naadam is the most widely watched festival among Mongols, and it’s believed to have existed for centuries in one fashion or another. Its origins date back to early military preparations – today it is common among sports such as archery, horse riding, wrestling, etc., which mongols will even organize small ‘mini’ naadam for special occasions, celebrations, weddings or spiritual gatherings. Historically, it served as a way to train soldiers for battle and was deeply connected to Mongols’ nomadic lifestyle. There are records of the three games of wrestling, horse racing and archery dating back to the 13th century book entitled ‘The Secret History of the Mongols’.

The biggest festival (National Naadam) is held in Mongolia’s Capital City, Ulaanbaatar, from July 11 to 12 at the National Sports Stadium. Annually the opening ceremony is an elaborate introduction featuring dancers, athletes, horse riders, musicians and more. After the ceremony, the competitions begin – though this only lasts for a couple days in Ulaanbaatar  – Naadam is also celebrated in different regions across Mongolia from July till August.

Genghis Khan’s nine horsetails, representing the nine tribes of Mongolia, are still ceremonially transported from the main Square to the Stadium that signifies ‘the official beginning’ of Mongolia’s Naadam festivities; at the opening and closing ceremonies, there are impressive parades. Another popular Naadam activity is the playing of games using shagai, sheep anklebones, that serve as game pieces and tokens of both divination and friendship; in the larger Naadam festivals, shagai tournaments may take place in a separate venue.

A total of 512 or 1024 wrestlers meet in a single-elimination tournament that lasts nine or ten rounds. Mongolian traditional wrestling is an untimed competition in which the wrestlers lose if they touch the ground with any part of their body other than their feet or hands. When picking pairs, the wrestler with the greatest fame has the privilege to choose his opponent. Wrestlers wear two-piece costumes consisting of a tight shoulder vest (zodog) and shorts (shuudag); only men are allowed to participate.

Each wrestler has an “trainer” called a zasuul. The zasuul sings a song of praise for the winning wrestler after rounds 3, 5, and 7. Winners of the 7th or 8th stage (depending on whether the competition features 512 or 1024 wrestlers) earn the title of Zaan “Elephant”. The winner of the 9th or 10th stage is called Arslan, “Lion”. In the final competition, all the “zasuuls” drop in the wake of each wrestler as they take steps toward each other – two time Arslans are called the Titans / Fiants, or Avraga.

Unlike Western horse racing, which consists of short sprints generally not much longer than 2 km – Mongolian horse racing (as featured in Naadam) is a cross-country event with races reaching 10–30 km long. Age class determines the length of each race; for example, two-year-old horses race for ten kilometers and seven-year-olds for 27 kilometers and up to 1000 horses from any part of Mongolia can be chosen to participate.

Children from 5 to 13 are chosen as jockeys and train in the months preceding the races. While jockeys are an important component, the main purpose of the races is to test the skill of the horses – Racehorses are trained and fed special diets. Before the races begin, the audience sings traditional songs and the jockeys sing a song called Gingo. Prizes are awarded to horses and jockeys – the top five horses in each class earn the title of Airgiyn Tav and the top three are given gold, silver and bronze medals. The winning jockey is praised with the title of Tumny Ekh or Leader of Ten Thousand. The horse that finishes last in the Daaga race (two-year-old horses race) is called Bayan Khodood (meaning “full stomach”); a song is sung to the Bayan Khodood wishing him luck to be next year’s winner.

In this competition both men and women may participate – each archer is given forty arrows; men shoot their arrows from 75 meters away while women shoot theirs from 65 meters away. Traditionally the archers wear their national clothing (Deel) during the competition. All the archers wear leather bracers up to the elbow on their outstretched arm, so that the deel’s cuff does not interfere with shooting.

Mongolian archery is unique for having dozens of surs or targets. Each sur is a small woven or wooden cylinder and they are placed on top of each other forming a wall of three-high which is approximately 8 inches high by 5 feet wide. Knocking a sur off the wall with an arrow counts as a hit, though knocking a sur from the centre will bring the archer more points. When the archer hits the target, the judge says uuhai, which means “hooray”. After each hit, an official repairs the damaged wall and makes it ready for the next attempt. The winners of the contest are granted the titles of “National Marksman” and “National Markswoman”.