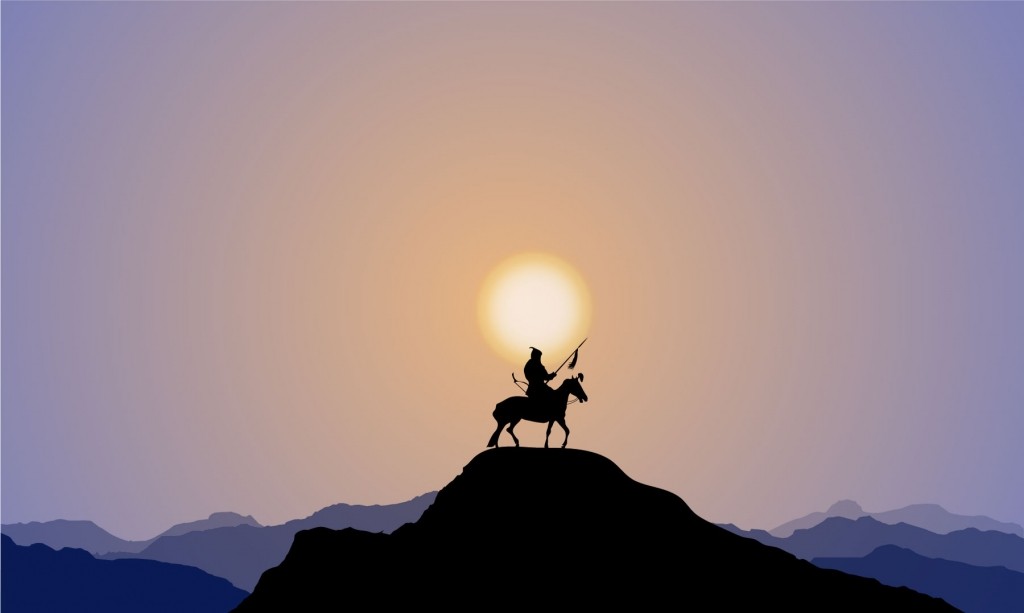 Mongolia Horseback Riding Tours: Traveling Mongolia by Horseback One Must Show Respect to the Horses

Traveling Mongolia by Horseback is an incredible experience – though mainly safe – one must always learn as much as possible from as many perspectives as possible beyond how to mount, dismount and ride a horse… Learning how Mongols relate to their horses, how they are trained, cared for, raised, etc., will provide you with the necessary ‘know how’ and methodology to ensure you stay on ‘good terms’ with your nomads. Many western and europeans relate to their horses very differently from Mongols and those differences can indeed create misunderstandings – hence it is vitally important to comprehend that Mongolian horses are not just a domesticated animal with a name… more importantly from ancient history till today horses “are part” of Mongolian legends, folklore, mythology, traditions, cultures, belief systems, superstitions, etc., as well as the day to day routines of transportation, herding, etc… from +40 to -40 across Mongolia’s incredibly harsh geographical terrains.

Some rural Mongols often state that “a good horse is definitively better than a lousy human.” As every Mongol has their own good horse – if you are deemed as not being a good human, and if your worth is less than their horse, then they have no time nor interest in you.

Keeping that in mind – one must show “respect” to Mongolian horses when traveling within Mongolia… Never assume that your culture is more important than of your Mongol hosts who’ve had an infinity with their horses for more than several thousand years. For mongols even strongly believe – leaving an injured or exhausted steed behind in the wilderness alone is strictly tabooed… Learn you must, for that isn’t wild and unfriendly – that is an INCREDIBLE LEVEL of compassion, honor and loyalty… and its their cultural DNA.

Mongolians infinity with horses dates back to ancient pre-shamanistic, shamanistic and modern belief systems… all of which are highlighted in Mongolian legends and folklores

First and foremost, a Mongolian with no horse is no Mongolian; cursing, beating and whipping horses on their heads or chests are strictly forbidden.

There are plenty of Mongolian stories of good steeds which live on through tales, legends and songs in Mongolia. Ancient tradition dictates that once a man’s horse dies, he must worship its head, hence, across Mongolia you will find many horse skulls ceremoniously placed on top of mountain ovoos that are decorate with white stones. If the horse was a racing horse used during Mongolia’s famed Naadam Festivals then the head must be wrapped in a silk wrapping called a “khadag”. Owing to the horses’ status within Mongolian culture, Mongolia’s famed folk instrument the “Moriin Huur” or “Horse-head fiddle” is a primary example among instruments that glorifies Mongolia’s horse culture via the horse carvings on the instrument. 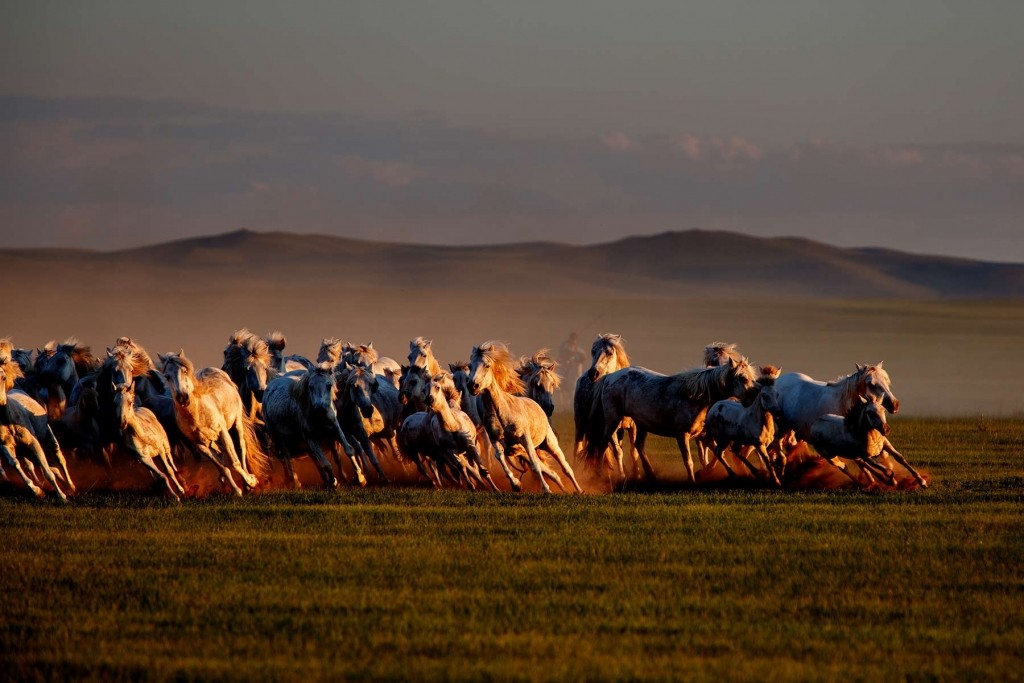 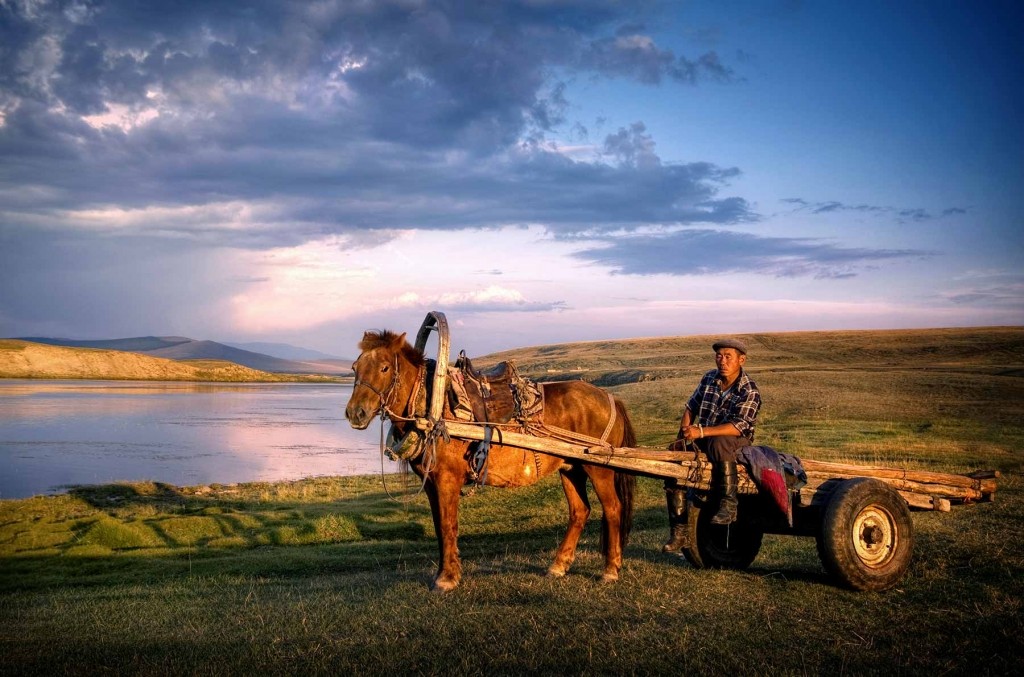 As in European and Western Societies we like to think of ourselves as humane – Mongolia’s horse culture is one of important roles and synergies that EPIC legends are made of… one of which provides life, commerce, protection and even food when required.Horses and their domestication has been a tradition in Mongolia for thousands of years. The tools, domestication and training techniques that are used to tame horses has been an important part of Mongolians’ lifestyle and more. Findings indicate that the Huns implemented policies to grow their horse herds as horse numbers were an important factor in a nation’s military; nowadays, horses are used mainly used for transport and races as well as sources for dairy, meat, hair and fur.

Once the dams (mother of a foal) and foals start gaining weight in the summer, usually from July to October, they are herded for milking. During the early months of their herding they are milked 6 to 8 times a day while during the latter months they are milked 3 to 5 times a day. Mare’s milk is rich in protein, mineral and vitamins. It is used make Airag and Aaruul while the oils are extracted. Mongolian tradition’s stated that the first time a mare is milked – it must be done by a man – to which afterwards anyone can milk the mare. Because the horses feed on wild pasture their meat is rich in nutrients, proteins as well as in taste. 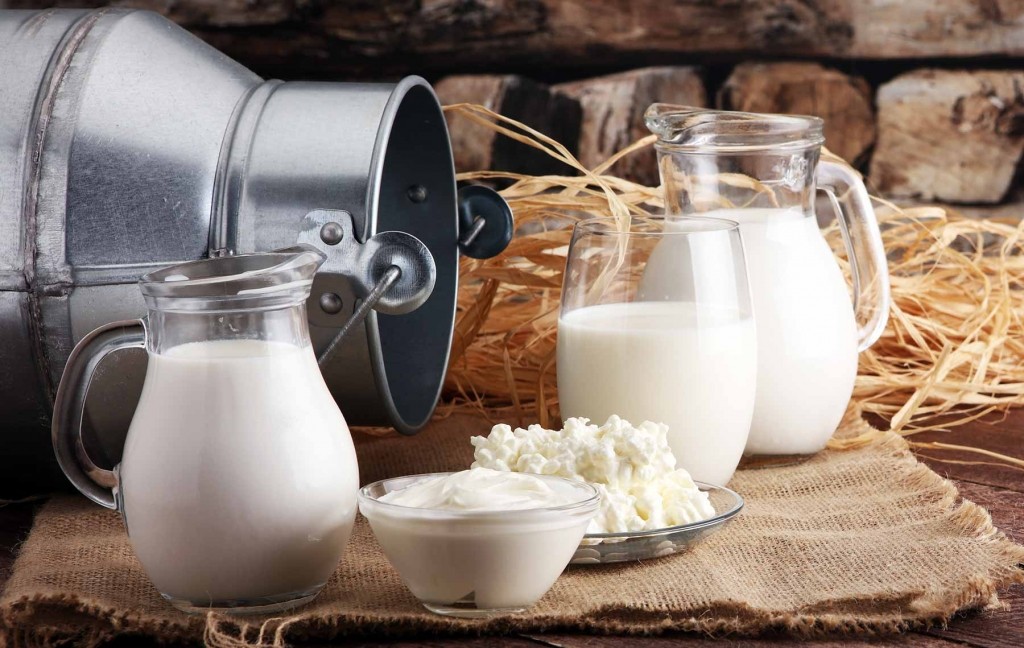 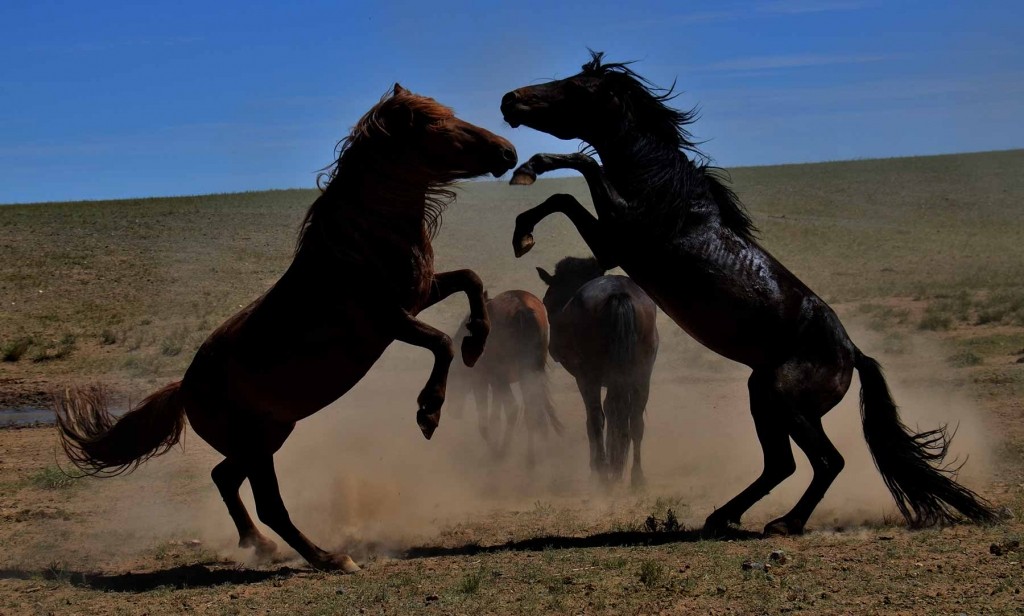 Mongolian horses’ hides are processed into leather-crafts and heavy duty ropes. A single horse yields 420 grams of mane, 100 grams of tail hair and 620 grams of fur. Horses’ tail hair is used to make horse-head fiddles – any horse tail may be used for fiddles, except for female horses and female horse tails erode by their urine over their life time. Their fur is collected late into March, however, nomads do not trim the manes of their stallions. According to legend, a man kept finding dead wolves around his horse herd and upon investigation he found out that his stallion was fighting off wolf packs and protecting his herd. So, he thought to himself, “My stallion is a great fighter and if I trim that long mane he could fight off wolves even better as it wouldn’t bother him anymore.”… the following morning he found his herd slaughtered. It turns out the mane protected the stallion’s neck from wolf bites – hence the tradition that Mongolian Stallions untrimmed manes.

Horses are trained into specific skills such as chasing after other horses to lasso them, sheep herding, long distance travels, racing and for performances for ceremonies. Each horse has different personality suited for different skills, like all humans. 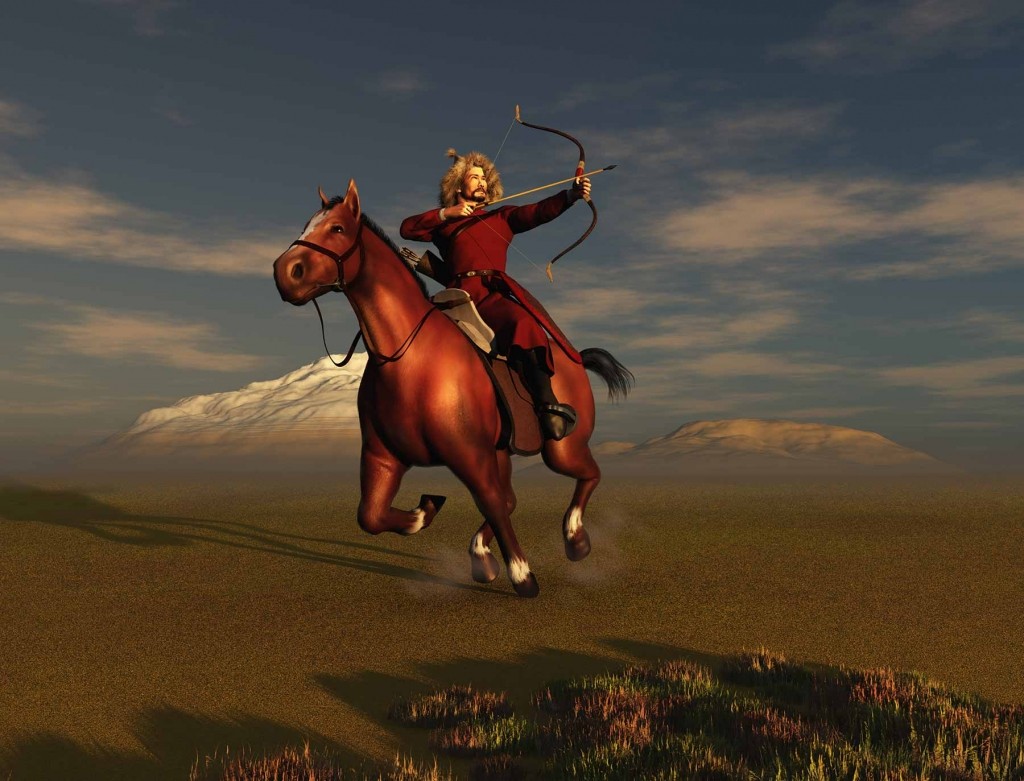 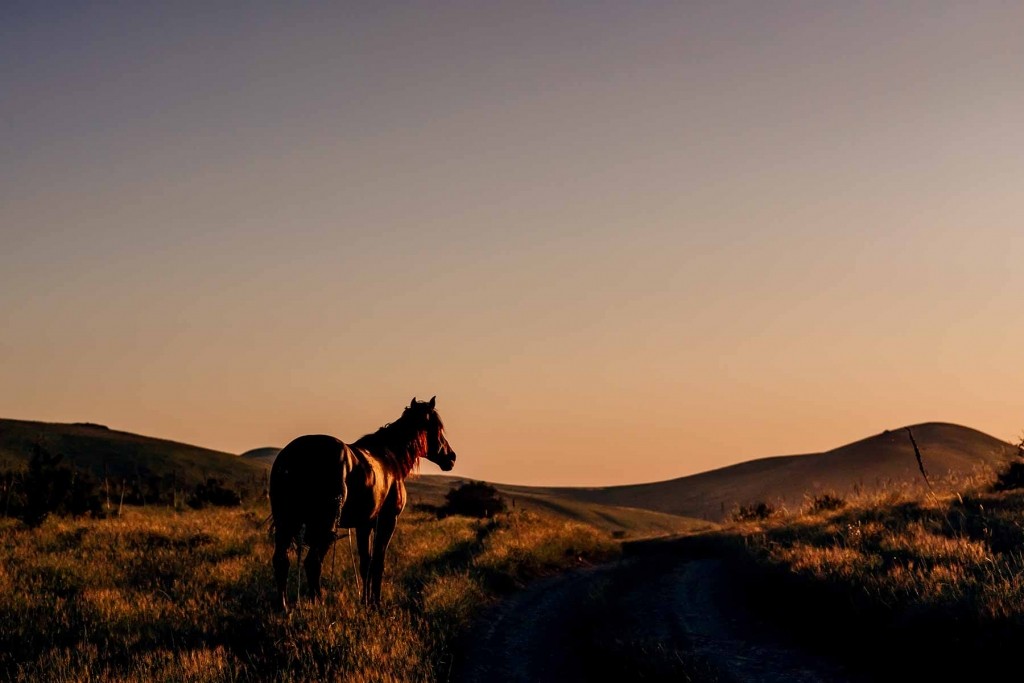 There are customs for how to ride and treat horses. One must mount a horse gently from its left side and dismount to its left as well. Not doing so might result in the horse acting erratically. While riding the horse shall only be whipped on its hind thighs. Whipping the horse’s other areas are frowned upon. One must not mistreat horses by cursing, beating, and so on.

After a long ride, the rider walks the horse around the rest stop 3 times clockwise. Doing so prevents blood from building up in the hooves of the horse. The rider must also remember to not water or take off the saddle when horses are sweaty after a ride. When removing the saddle, the padding underneath is kept on to prevent a heatstroke during the summer heat. And during the winter, one must not only keep the padding on, but put covers on the horse as well.

Mongolians have many unconventional uses for horses… example – as horses feed on the finest greenery in the wild their excrements are rich in nutrients. Those dungs take on a darker color and are collected and fed to malnourished sheep and goats during spring. Mongolian horses’ behaviors can be observed to forecast weather. For example, during winter and spring when the herd spreads out to pasture the night will be warmer so when they face downwind it often means that the night will be cold. When they start blowing their nose more often – that is an indicator that the summer will have lots of rain, or, the winter will have lots of snow. When the horses’ fur starts getting fluffy with reduced appetite and seeming sluggish – these are all signs of immense cold approaching 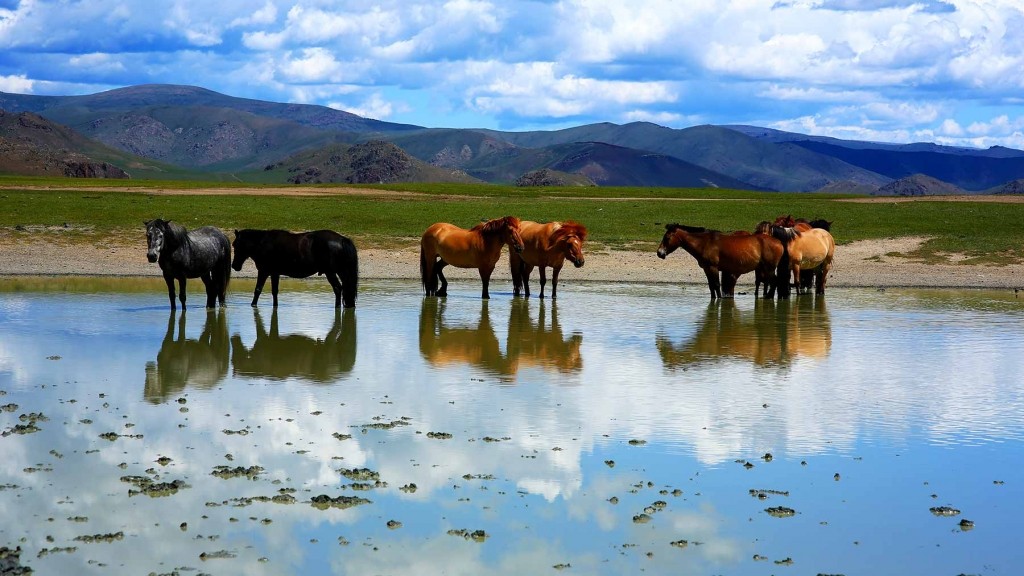 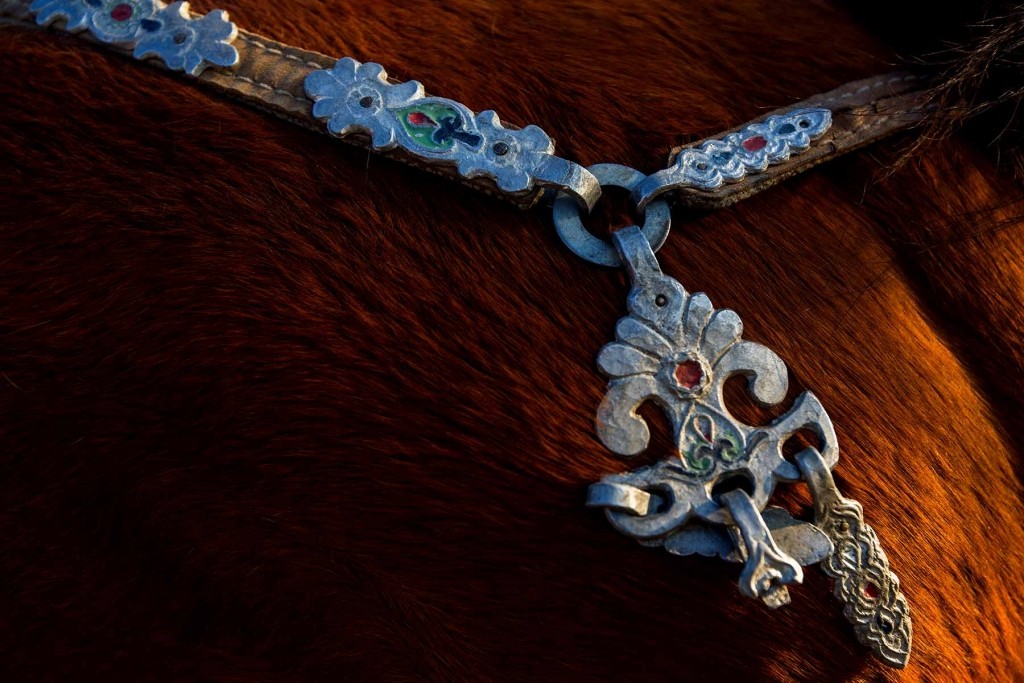 Mongolians domestication of horses dates back to some 3000-5000 years ago!

Ever since ancient Mongols domesticated horses 3000-5000 years ago, saddles and bridles have been essential pieces of equipment. The making of saddles has evolved over that period. Crotch wood was used as rudimentary saddles – then string girths, harnesses, horn stirrups and decorations were introduced into the saddle-making process. Although the origins of bridles aren’t discovered ancient graves containing bits, bit rings and bit decors were excavated. Some bits were found with their rings dating back to the Bronze Age are the oldest known evidence of bridle making. Once horse tack evolved into what it is now – Mongol smiths have honed their skills in making fancy saddles and bridles. Now saddles have varying makes and styles such as “Borjgon”, “Sambuu”, “Darkhad”, “Buriad”, “Uzemchin” and “Oirad”. “Darkhad” saddles are often decorated with steel and silver. While “Tojil” saddles are known for their exquisite craftsmanship passed down from generation to generation. Fancy saddles and bridles are often used to display ones wealth and fortune.

Branding is an ancient art that provides insight into tribes, religion and even Kings of past

Mongolian horse branding, and the brands themselves, are deeply rooted in ancient Mongol history as they are passed down from generations. They provide an insight into ancient tribes, religion and kings of the past – thousands of brands were left carved into rocks and cliffs across Mongolia. A rock called “Rashaan” in Khentii province has over 300 brand symbols from the Stone Age to the Middle ages preserved in the form of petroglyphs. The symbols of ancient tribes and kings can still be found in modern brands today. 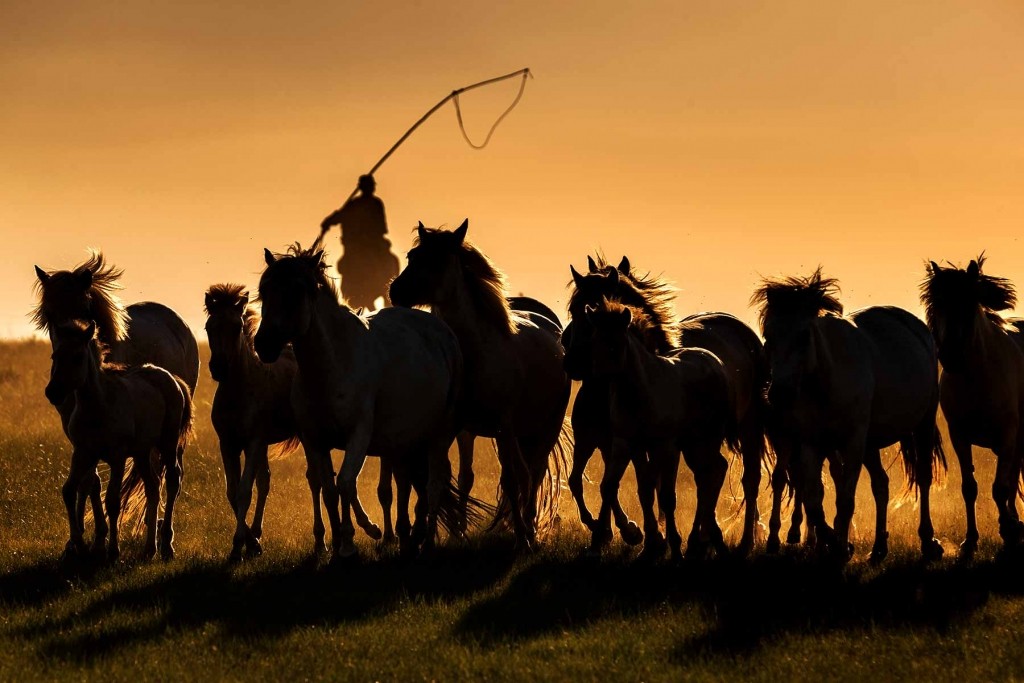 Picking a horse to be trained is the first step of the process as not all horses are meant for taming other horses. Horses with longer legs, heavier bodies aren’t suitable for such training, however, on the contrary horses that are agile yet docile aging between 3-4 years and smaller in size are picked. A well trained horse allows the nomad to charge into a herd of horses and lean side to side with ease when he reaches for his target – Lasso horses aren’t raced for celebrations they specially kept for their important function.

More information about the importance of both the trainer, rider and the horse

The quickest of the herd, with a racing lineage, is picked to be a race horse. They are trained all year round until about a month before the Naadam festival – during that month the horse is put on a carefully planned diet and prepared for the Naadam race. While a trainer values his horses’ equipment and never steps over them or lays them low.

Mongolia’s Naadam race is divided by age groups: the groups are Daaga or 2-year-olds, Shudlen or 3-year-olds, Khyazaalan or 4-year-olds, Soyolon or 5,6-year-olds and older than 6+ year old horses each racing lenghts of 10, 15, 18, 20 and 25 kilometers respectively.

As mandated by law, the horses must be ridden by kids older than 7, with protective equipment and insurance. And much like the horses’ diets, the kids are fed meals of millet grains to keep their weight low. Mongolian riders’ clothing and equipments are decorated with symbols such as birds, soyombo, butterflies and stars signifying the quickness of the horses.

Day of the race when the race is ready, a man, with a ceremonial costume will pace the horse with a flag that leads the racers to circle the finish line 3 times and then lead them to the start line – during which the kids sing “Giingoo” to excite the horses.

The “Giingoo” chant is a prayer asking the deity of the Sun to bless the rider and mount – let them ride across the earth peacefully. The two syllables of the chant is sung for 30 counts and when sung properly it awes the crowd as well as the horses – their excitement is clearly seen by then stretching and stomping their hooves. A tale says that a boy named Giin with his daaga called Goo was refused entry into a race because he was poor, however, when he sung “Giin-goo” the court allowed him to race out of adoration.

The first five horses of each race are poetically praised – the praising is called ‘announcing horse ranks’. The announcer says each line in quick succession in a rhythm similar to a horse’s gallop – the praise is repeated 3 times around the ceremony tent. On the final line the rider, trainer and horse are treated to Airag, a fermented mare’s milk drink. The winning horse is ranked “Tumnii Ekh” while the last place daaga is dubbed “Bayan Khodood”. The Bayan Khodood is brought up on stage rewarded as much as a winning horse and a boiled sheep’s stomach is tied to its saddle, hence the name Bayan Khodood or ‘Brimming Stomach”. 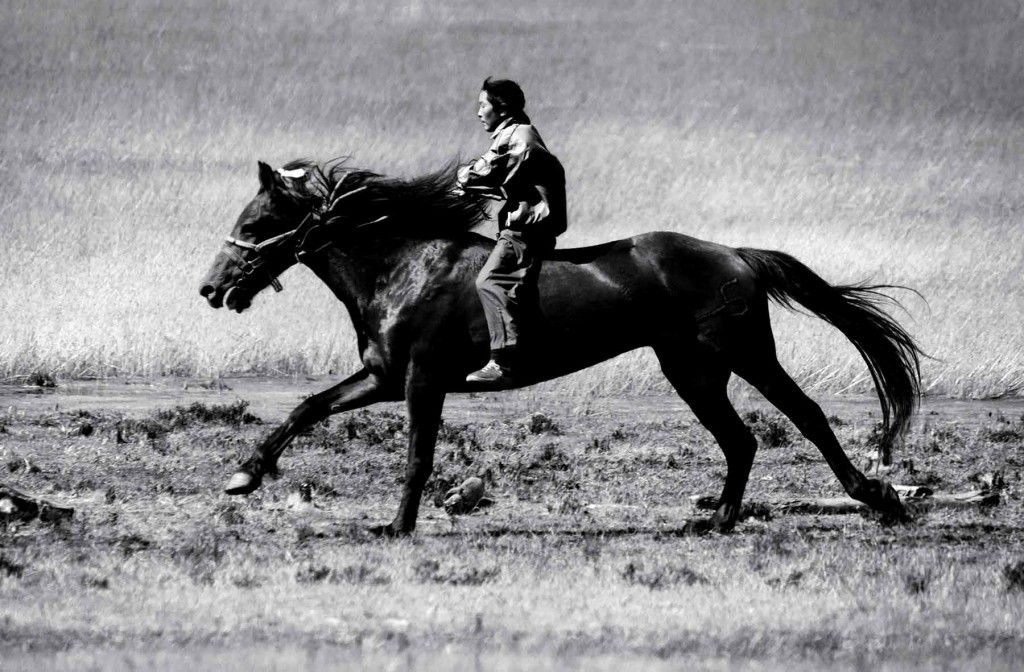