Ulaanbaatar City’s Zanabazar Museum is a cultural gem with over 620 unique and invaluable artworks registered with the treasury; 50 of them are held at Zanabazar museum. The Fine Arts G. Zanabazar Museum was founded in 1966 and is renowned for his works (1635-1724) which include the statues of Sita Tara, the Five Dhayani Buddhas and the Bodhi Stupa. It has 12 exhibition galleries covering the arts from ancient civilizations up to the beginning of the 20th Century. Initially opened with over 300 exhibits, the Museum rapidly enriched the number of its objects, with the modern arts becoming a separate division in 1989 as an Arts Gallery.

The Museum displays the artistic works of Mongolian masters of the 18-20th Centuries, coral masks, tankas, as well as the famous paintings of B. Sharav entitled “A Day in Mongolia” and “Airag feast”; the Museum contains 13000 objects. The exhibition hall regularly hosts the works of contemporary artists and the G. Zanabazar Museum has been successfully cooperating with UNESCO for the improvement of the preservation of priceless exhibits and for the training of the Museum staff.

Within the museum you’ll find the ancient artifacts chamber that holds a sword from the Bronze Age with fancy engravings, the only one of its kind in Asia, Human Stones from the Tureg era (VI-VII century), and vases from the Hun era. The chamber also holds replicas of the following: the murals found at Erdenezuu Monastery, Stone Age petroglyphs and deer stones found in Mongolia.

The Zanabazar Creations chamber holds all things Zanabazar. From the alphabet he invented, Soyombo, to his self-portraits, his students’ portrait of him, and his mother’s painting. You will also find gilded copper sculptures of Buddhist gods such as the Five Dhayani, Sita Tara, Bodhi Stupa and Manzushir.

The Thangka gallery contains tankas and soil paintings of Buddhist deities made in the 19th century.

The Appliqués gallery exhibits early 20th century canvas and fabric works from numerous artists. One of the highlights is a 15 by 2.5 meter appliqué depicting 35 guardians of heaven.

The Tsam ceremony hall displays authentic Tsam dancing masks and equipment. Buddhists consider the dance to be that of the gods, hence the need for the masks to be accurate. To craft the masks special paper is droused in glue and shaped around a wooden mold until it takes form. The masks, depending on size, can weigh around 5 to 7 kilograms, while the rest of the equipment weighs up to 30 kilograms. The garbs are decorated with various materials such as ivory, gems and precious metals.

Maidar is the future manifestation of Buddha. For his ceremony, the deity is placed on a carriage, drawn by a green horse and marched West to East by monks. This hall is dedicated to Maidar and hopes of him returning to bring peace upon a world in turmoil; it exhibits Maidar’s carriage, tankas, sculptures and “Khuree Maidar” painting.

As mentioned, the museum holds tens of priceless art works recognized by the treasury. Some of them are available to the public.

“Ekh Khandjamts” was deemed ‘heritage’ by the state in 2002. This depiction of Queen Khandjamts was painted in the 17th century by Zanabazar on a 53 by 38 centimeter canvas.

“Duinkhoryn khot mandal” is an appliqué made by an artist from Ulaanbaatar, when it was known as Ikh Khuree in the 18th century. The artwork was deemed ‘heritage’ by the government in 1998 with its 2.8 meter appliqué depicts heaven from a birds eye view.

“Baldanlkham Ohin Tenger” is a tanka, sizing 139 by 119 centimeters, decorated with gold, silver, pearls and gems by an unknown early 19th century artist and was deemed ‘heritage’ in 1995.

“Urs gargaj baigaa ni” is an eccentric painting by the founder of Mongolian modern arts B. Sharav in 1912. It depicts Mongolia’s lifestyle in the late 19th century and deemed ‘heritage’ in 1995.

“G. Zanabazaryn Khurug” is a portrait of Zanabazar and considered on of the best heritage from Mongolia during the 17th century. The portrait depicts Zanabazar with a book his lap, mountains by his side, his teacher Demchiggarav with the deity of arts and Bogd Zonkhov with the Sita Tara; the painting was deemed heritage in 2002. 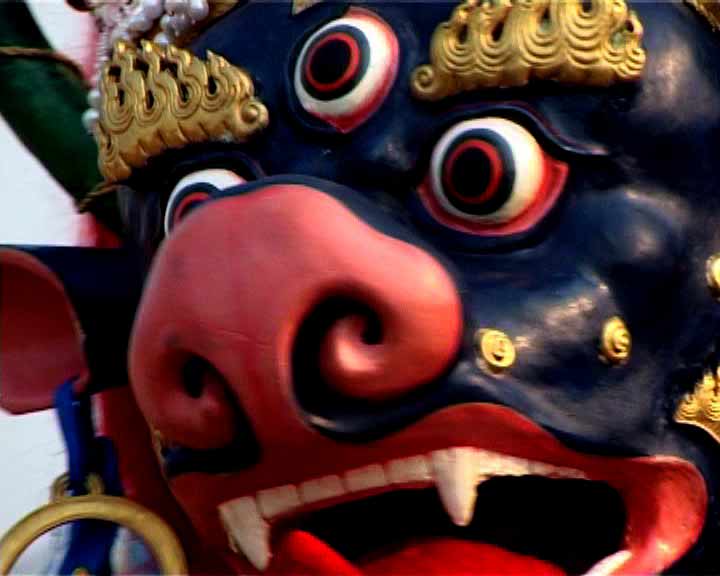